History of the Fourteenth Brooklyn Regiment 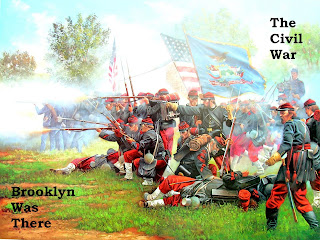 The Fourteenth Regiment, New York State Militia was created by an Act of the New York State Legislature adopted May 14th, 1847 which reorganized the State Militia. Although some of the companies which later constituted the regiment were in existence as separate organizations prior to that time, the regiment as a unit dated from July 5, 1847. (Note: Some sources credit the Fourteenth as being one of two oldest military organizations due to the direct lineage of two separate companies to the Dutch Burgher Guard of New Amsterdam.) On that day, at Press' Military Garden, located where the old Kings County Court House stood at Fulton and Joralemon Streets, Philip S. Crooke was elected Colonel of the newly authorized 14th Regiment. This was accomplished at a meeting of the representatives of the existing militia companies and other interested organizations. In addition, two companies, A and B, of 32 men each were formed. The authorized company strength was from time to time increased until the Civil War, when each company had about 60 to 70 men.


In February, 1848, Companies C, D, E, F and G were created. All of these units came from the old towns that made up the City of Brooklyn - which roughly covered the area that today is downtown Brooklyn. Later, H Company was recruited from the nearby villages of Flatbush, New Utrecht and Williamsburg. One of the earliest newspaper references to the regiment appeared in the first issue of the "New York Times" of September 18, 1851. The Brooklyn news of that date consisted of an article about the annual parade and review of the Fifth Brigade comprising the 13th and 14th Regiments by General H. B Duryea. The parade was scheduled for September 29, 1851 and the Assembly was set for 8:30 A.M. The 14th Regiment was directed to form on Cranberry Street with its right formed on Hicks Street.


In 1860 the Board of Officers adopted the French Chasseurs-a-Pied uniform for the regiment. This consisted of blue coat, red pantaloons, white gaiters and blue forage cap. In time, it gave rise to the name by which the regiment became known in the war to friend and foe alike - "the Red Legged Devils." The colorful and distinct dress uniform of blue coat, red trousers and shako worn by the 14th Infantry, New York National Guard, before World War II, was inspired by this Civil War uniform. The color bearers of the regiment wore exact copies of the Civil War uniform into modern times.

Within a week after President Lincoln's call for 75,000 three-month volunteers, Colonel Alfred M. Wood, then commanding the regiment, reported to Washington that it was ready. The War Department advised him that the regiment would not be accepted as a three months service regiment but it would be accepted only if it volunteered for three years. Every man indicated that this was acceptable and, therefore, the 14th regiment became the only Brooklyn National Guard organization to serve a full three year term of enlistment in the Civil War. The state refused to call them out, but at length the order came directly from President Lincoln for the regiment to proceed to Washington. On that memorable afternoon of May 18, 1861, the regiment moved out of Fort Greene Park at Lieutenant Colonel Edward B. Fowler's command, (Colonel Wood then being at the capital) and proceeded down Myrtle Avenue to Fulton Ferry to the strains of "The Girl I Left Behind Me,". For many years thereafter, on May 18th, the Civil War veterans tendered an annual "Campfire" dinner to the officers of the active regiment. (The last surviving Civil War veteran was Corporal Frederick N. Saunders of Company B. He died on October 31, 1939, at the age of 96. He is buried at Pinelawn National Cemetery, Long Island.)


The regiment arrived in Washington on May 22nd and moved into camp on 7th Street, near the camp of the 7th Regiment NYSM. The following day, General Irwin McDowell mustered the regiment into the Federal Service for three years. This date, May 23rd, was celebrated annually by the active regiment with a Review in honor of its war veterans and by the awarding of long service and 100 per cent duty medals and other trophies until the 1990s. A Civil War morning report book of Company C, shows that on the first anniversary of that day the regiment was reviewed by President Lincoln.


On July 2, 1861, the regiment crossed the Potomac River and camped near Arlington House on the present site of the National Cemetery. It was then assigned to the brigade of General Andrew Porter. This was considered one of the crack brigades of the Army. It consisted of Griffin's Battery (5th U. S. Artillery, Battery B), two troops of the 2nd United States Cavalry, 8 companies of U. S. Regulars, a battalion of Marines and the 8th and 14th Regiments of the New York State Militia and the 27th New York Volunteers. That the Regiment subsequently justified its right to a place in this select company is evidenced by the following statement of an eminent historian: "No regulars that ever served on any field won more imperishable honor than this Regiment of militia from the City of Brooklyn." The regiment received its baptism of fire at Bull Run. There it suffered 141 casualties: 2 officers and 21 men killed, 10 men dead of wounds, 69 men wounded and 39 captured. It was shortly after this historic battle that General McDowell coined the motto, "Baptized by Fire" which the 14th Regiment bears on its regimental crest.


When the regiment reassembled at Arlington, word was received from Albany that the number of the regiment had been changed by the State authorities. Henceforth, the message stated, it would be known as the 84th New York Volunteers. Immediately there was a storm of protest from officers and men alike. An appeal was made to the federal government. Happily, General McDowell was soon thereafter able to say: "You were mustered by me into the service of the United States as part of the Militia of the State of New York known as the Fourteenth; you have been baptized by fire under that number as such you shall be recognized by the United States Government and by no other number." The regiment was also known as the "14th Brooklyn" or sometimes the "Brooklyn Chasseurs"


The regiment's performance in the war was long and distinguished. After Bull Run, it went on to fight at Groveton, Fredericksburg, Chancellorsville, South Mountain, Antietam, Gettysburg, Spottsylvania, in the Wilderness and many other engagements. At Gettysburg, it had the honor of being one of the first infantry units to be committed to that action. In the vanguard of the 1st Division (commanded by Major General James S. Wadsworth) of the I Corps, the 14th Regiment was rushed up to relieve the Union cavalry screen and to hold off Confederate forces while the bulk of the Union Army was being brought up. On the morning of July 1, 1863, it participated in the repulse of Davis' Mississippi Brigade and in the capture of a large portion of that command in the Railroad Cut west of Gettysburg. The Fourteeenth was committed to action on all three days.


The regiment returned to Brooklyn on May 25, 1864. Known as one of the "Three Hundred Fighting Regiments " of the war, the regiment suffered 717 casualties during its service. On that date the Brooklyn EAGLE declared:
"No Regiment has a more spotless record. Brooklyn may well be proud of her sons for they have done honor to their birthplace."

A number of the men of the 14th continued to serve after the regiment was mustered out. They were transferred to the 5th New York State Veteran Infantry, continuing in service until Appomattox Court House.

At the outbreak of the Spanish American War, the regiment was one of those selected to enter the service of the United States by an order of the Adjutant General dated April 27, 1898. The regiment left Brooklyn on May 2nd under the command of Colonel Frederick Dent Grant, son of General U. S. Grant. For the remainder of the month it was at Hempstead, Long Island. On May 17th it proceeded to Camp G.H. Thomas, Chickamauga, Georgia, and was assigned to the 1st Brigade, 1st Division, III Corps. Routine camp life followed until September 3rd. On that date the regiment was moved to Camp Shipp, Anniston, Alabama, where it remained until it departed for home on September 16th. It was mustered out of service October 27, 1898.